Melba Moore – You stepped into my life 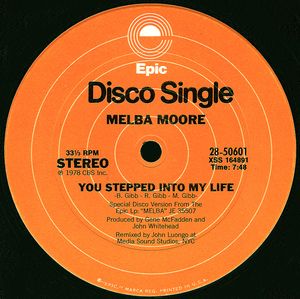 Melba Moore was born in 1945 in New York City, New York, to Gertrude Melba Smith (known professionally as Bonnie Davis) and Teddy Hill, and raised in Harlem, New York, until she was 9 and her divorced mother remarried jazz pianist Clement Leroy Moorman. She attended Newark Arts High School in Newark, New Jersey. Her mother, Bonnie Davis, had a No. 1 R&B hit with “Don’t Stop Now“, prior to Melba’s birth. Although her biological father was Big Band leader and saxophonist Teddy Hill, it was her stepfather Moorman (who played on “Don’t Stop Now”) who became a prime influence and encouragement in Moore’s musical pursuits, insisting that she learn to play the piano. When she graduated from college she worked as a music teacher, but she soon decided to pursue the spotlight. She chose her stage name by shortening her stepfather’s surname from Moorman and using her middle name, “Melba”.

Moore began her performing career in 1967 as Dionne in the original cast of the musical Hair along with Ronnie Dyson and Diane Keaton. Moore replaced Keaton in the role of Sheila. In 1970, she won a Tony Award for Best Performance by a Featured Actress in a Musical for her portrayal of Lutiebelle in Purlie. She would not return to Broadway until 1978 when she appeared (as Marsinah) with Eartha Kitt in Timbuktu! but left the show after a few weeks and was replaced by Vanessa Shaw. Following the success of Purlie, Moore landed two big-screen film roles, released two successful albums, 1970’s I Got Love and Look What You’re Doing to the Man, and co-starred with actor Clifton Davis in the then-couple’s own successful variety television series in 1972. Both Moore and Davis revealed that the show was canceled after its brief run when their relationship ended.

When Moore’s managers and accountants left her in 1973, she returned to Newark and began singing in benefits. Her career picked up after she met record manager and business promoter Charles Huggins after a performance at the Apollo Theater in 1974. They married in 1975 and formed Hush Productions, signing notable R&B artists such as Freddie Jackson and Meli’sa Morgan.